The brewing winds of war will soon rip the family apart 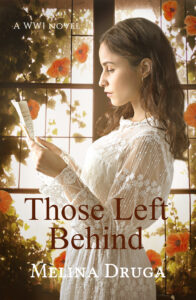 The brewing winds of war will soon rip the family apart.

The Steward family eagerly prepares for the wedding of their daughter Hettie to Geoffrey Bartlette. The event forever binds them to the Bartlettes who have been their friends for decades.

When the Great War explodes, Hettie and her brother, Freddie, join the Canadian Army Medical Corps. This decision is met with resistance and disapproval, causing a rift in the siblings’ relationship with their parents.

As the war rages on, a once stable friendship is tested, two daughters’ marriages are in tatters, and the scourge of influenza sweeps through the civilian population.

Will the Stewards bend under pressure?

Those Left Behind by Melina Druga

Amazon
Barnes & Noble
Apple Books
Kobo
Other Retailers
Although the years of WWI felt like a slog for Hettie’s family, I didn’t get that sense as a reader. I was interested throughout and curious about what came next. Fans of historical fiction will likely love this book as will those who like narrative nonfiction like that of Erik Larson. Highly recommended. 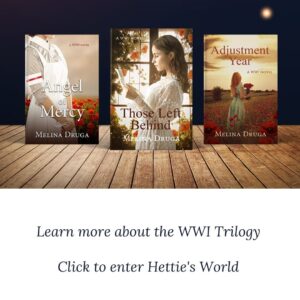 more
We use cookies on our website to give you the most relevant experience by remembering your preferences and repeat visits. By clicking “Accept”, you consent to the use of ALL the cookies.
Read More.
Cookie SettingsAccept
Manage consent

This website uses cookies to improve your experience while you navigate through the website. Out of these, the cookies that are categorized as necessary are stored on your browser as they are essential for the working of basic functionalities of the website. We also use third-party cookies that help us analyze and understand how you use this website. These cookies will be stored in your browser only with your consent. You also have the option to opt-out of these cookies. But opting out of some of these cookies may affect your browsing experience.
Necessary Always Enabled
Necessary cookies are absolutely essential for the website to function properly. These cookies ensure basic functionalities and security features of the website, anonymously.
Functional
Functional cookies help to perform certain functionalities like sharing the content of the website on social media platforms, collect feedbacks, and other third-party features.
Performance
Performance cookies are used to understand and analyze the key performance indexes of the website which helps in delivering a better user experience for the visitors.
Analytics
Analytical cookies are used to understand how visitors interact with the website. These cookies help provide information on metrics the number of visitors, bounce rate, traffic source, etc.
Advertisement
Advertisement cookies are used to provide visitors with relevant ads and marketing campaigns. These cookies track visitors across websites and collect information to provide customized ads.
Others
Other uncategorized cookies are those that are being analyzed and have not been classified into a category as yet.
SAVE & ACCEPT