Victorian and Edwardian Orphans: Nothing Like Their Fictional Counterparts

In the 19th and parts of the 20th centuries, orphans, abandoned children, runaways and children those whose parents were too poor to take care of them ended up in orphanages.

Orphanages were funded by public charities. They provided orphans with a home, education, food and clothing.

Many of these institutions, however, were overcrowded and underfunded, exposing children inadvertently to malnutrition and disease.  They also were subjected to corporal punishment.

In addition, children had to be admitted to orphanages. If there wasn’t an opening, the child was turned away. Often these children became homeless criminals or were forced into child labor.

The orphanages themselves were beautiful structures, often with a fence surrounding the property. Sometimes orphanages were segregated into all-boys or all-girls facilities.

Some agencies accepted requests from parents seeking children, but not all.

Adoption did not always equal a happy ending. Children, especially those from a lower socio-economic class than their adoptive parents, were never fully accepted as members of the family. They were treated coldly or like servants.

If a child was not adopted, upon adulthood, he or she was forced to leave the institution and was now homeless.

No legal rules regarding adoption, however, existed during this era, so any adoptions were informal agreements.

In 19th century America, orphan trains took children west from New York and Boston so they could be adopted. Children were forced to stand in a public building while they were inspected by their potential parents. Siblings usually were separated.

Authorities visited the orphan-train-children’s homes, and if abuse was evident, the child was removed to be adopted by another family.

Orphans have a been a popular subject in literature for the past two centuries.  In Victorian and Edwardian literature, orphans were always depicted as brave heroes and heroines.

Some famous works containing orphans include:

“The orphan is … an essentially novelistic character, set loose from established conventions to face a world of endless possibilities (and dangers),” professor John Mullan says of the popularity of orphans in literature. “The orphan leads the reader through a maze of experiences, encountering life’s threats and grasping its opportunities. Being the focus of the story’s interest, he or she is a naïve mirror to the qualities of others. In children’s fiction, of course, the orphan will eventually find the happiness to compensate for being deprived of parents.” 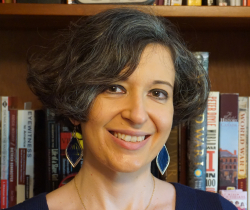 Melina Druga
Most kids have an active imagination.My imagination has stayed strong into adulthood, and I’ve funneled that creativity into a successful writing career.I write history, both fiction and nonfiction, because although your school history classes may have been boring, the past is not.My goal is to bring the past to life in all its myriad of colors.

Most kids have an active imagination. My imagination has stayed strong into adulthood, and I’ve funneled that creativity into a successful writing career. I write history, both fiction and nonfiction, because although your school history classes may have been boring, the past is not. My goal is to bring the past to life in all its myriad of colors.
Website https://www.melinadruga.com

I write history, both fiction and nonfiction, because although your school history classes may have been boring, the past is not.  My goal is to bring the past to life in all its myriad of colors.